We use cookies to provide you with a better experience. By continuing to browse the site you are agreeing to our use of cookies in accordance with our Privacy Policy.
Home » Workplace myth?
Office safety Ergonomics 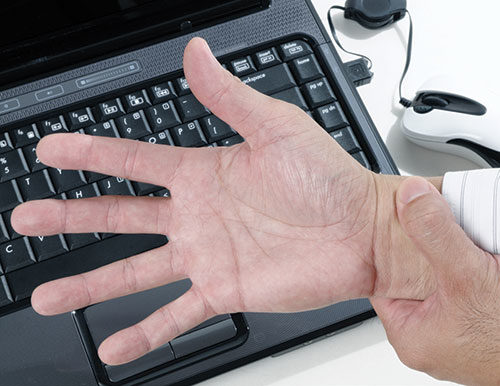 Everyone knows that spending too much time working on a computer keyboard and with a mouse can cause hand pain and numbness – more commonly known as carpal tunnel syndrome.

Or can it? Some researchers suggest the connection between CTS and computer keyboard use may be a myth.

According to experts, including the Mayo Clinic in Rochester, MN, little clinical evidence suggests computer keyboard use is a risk factor for developing CTS. Although other types of hand strain can result from overuse of a keyboard or mouse, CTS likely is not linked to these actions.

CTS occurs when tendons in the wrist swell, applying pressure to the median nerve that runs through the forearm and into the hand, according to the Rosemont, IL-based American Academy of Orthopaedic Surgeons. CTS can cause numbness or tingling in the hand, or feelings similar to electrical shock in the thumb, index finger and middle finger. These symptoms often progress over time until they become constant. Muscle weakness and clumsiness may appear when the condition becomes severe.

A number of factors may contribute to the development of CTS:

“Probably 90 percent of carpal tunnel syndrome is idiopathic – nobody knows why it occurs,” said Barry Simmons, M.D., chief of the hand and upper extremity service in the department of orthopedic surgery at Boston’s Brigham and Women’s Hospital. “There’s no answer … but we do know that it’s not caused by computer keyboard use.”

CTS most commonly affects women around age 50. According to the National Institute of Neurological Disorders and Stroke, women are 3 times more likely than men to be diagnosed with CTS – whether they work on a computer or not.

Simmons has seen many older women – who have never worked on a computer – who  do not understand their CTS diagnosis. He has to explain to them that a correlation does not exist.

In 2008, a review of eight epidemiological studies on the connection between computer use and CTS was published in BMC Musculoskeletal Disorders (Vol. 9). The review found no evidence that computer work or other repetitive, low-force work causes CTS. Certain wrist positions were shown to increase pressure on the carpal tunnel, but this increased pressure did not reach dangerous levels.

Although misperceptions among the public may exist, “in the scientific community, who deals with upper-extremity disorders, it’s accepted that keyboard use does not cause CTS,” Simmons said. “In the knowledgeable community, it has been proven and has been accepted.”

When work is a factor

However, some work activities can aid in the development of CTS. A German study published in Deutsches Aerzteblatt International (Vol. 108, No. 14) in April 2011 found that a causal connection can be made between certain occupational factors and CTS.

Repetitive manual work tasks requiring a forceful grip and use of vibrating tools can damage the median nerve in the arm, contributing to CTS. However, that same study also found keyboard work did not raise the risk of CTS.

Although computer keyboard work is not linked to CTS, it does not mean keyboards do not cause any pain or strain in the hand and wrist. “We’re not saying that computer keyboard use doesn’t cause disorders of the arm, but they don’t cause carpal tunnel syndrome,” Simmons said.

It is important, Simmons noted, to recognize the differences between CTS and other types of keyboard-related disorders. A standard keyboard-related musculoskeletal disorder does not narrow the carpal tunnel in the manner that CTS does.

“Upper-extremity disorders related to the use of computer keyboards are the second most common reason for work-related disability after back pain,” he said. “But don’t make the leap from repetitive strain and cumulative trauma disorder to carpal tunnel syndrome. They’re totally different diseases.”

A variety of therapies and interventions may be helpful in alleviating symptoms of some computer keyboard-related disorders, but in the case of CTS, the most effective treatment is surgery. The use of chiropractors or physical therapists generally is ineffective in treating CTS, as is use of wrist rests or other ergonomic workstation adjustments.

However, workers can customize their workstation and modify hand movement to help alleviate the symptoms of some repetitive stress injuries related to keyboard work.

To reduce the risk of some upper-extremity disorders related to computer use, Harvard Medical School recommends:

The myth of ‘de-energized work’