We use cookies to provide you with a better experience. By continuing to browse the site you are agreeing to our use of cookies in accordance with our Privacy Policy.
Home » Obstructing safety?
Fatigue Worker health and wellness Transportation Trucking

Concerned about the effects of obstructive sleep apnea among truck drivers, transportation officials may adjust guidelines to increase screenings for the disorder To help truck drivers be physically and mentally prepared for the demands of their jobs, the Federal Motor Carrier Safety Administration mandates a minimum number of hours drivers must sleep on days they drive. What these regulations cannot take into account, however, is whether drivers who have a sleeping disorder have actually achieved restful sleep before getting behind the wheel.

By some estimates, 13 to 28 percent of commercial motor vehicle license-holders suffer from obstructive sleep apnea. The National Heart, Lung, and Blood Institute states that people with the disorder, which can be caused by excess fatty tissue or a large tongue or tonsils, experience repeated breathing pauses of at least 10 seconds. Research has shown that obstructive sleep apnea severely impacts a driver’s focus and attention, response time to roadway hazards, and decision-making skills – increasing the risk of crashing. And, depending on the severity of the disorder, sufferers may be chronically sleep-deprived and unaware that their driving is impaired, said Indira Gurubhagavatula, assistant professor of medicine at the Veteran’s Administration Medical Center in Philadelphia and director of occupational sleep medicine at the Perelman School of Medicine at the University of Pennsylvania. 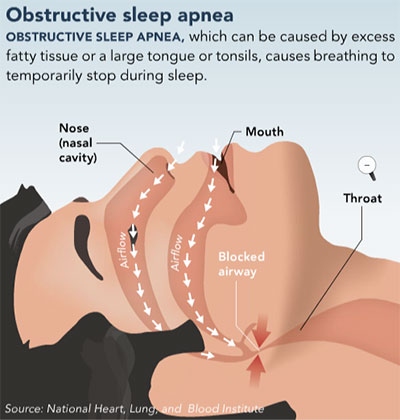 “Research shows that people who are chronically sleepy and whose performance is impaired are often not able to judge their own level of impairment accurately, so they may be overconfident about their performance capabilities,” Gurubhagavatula said. As a result, many truck drivers with obstructive sleep apnea are unaware they have the condition, and those who are aware may not seek treatment.

FMCSA’s current guidelines for CMV driver medical certification state that drivers cannot be certified if they have an untreated medical condition that would make driving unsafe. Medical examiners following FMCSA’s guidelines must ask patients whether they experience drowsiness while driving. Knowing they might be required to undergo testing (and miss valuable driving assignments), CMV drivers may not respond to these questions honestly, said Boyd Stephenson, director of hazardous materials policy and licensing for the American Trucking Associations in Arlington, VA.

Gurubhagavatula said truck drivers should not be afraid to receive an obstructive sleep apnea diagnosis.

“A diagnosis of sleep apnea in and of itself does not mean that a person cannot be a truck driver,” she said. “There are many, many truck drivers who have sleep apnea and having it treated, and are continuing to drive and have successful careers. The purpose of [FMCSA’s guidelines] is to raise drivers’ safety and keep them personally safe and to keep other drivers on the road safe.”

In response to low detection of obstructive sleep apnea among truck drivers, FMCSA is developing regulatory guidance for medical examiners to screen drivers who have the greatest risk factors for the disorder. FMCSA’s Motor Carrier Safety Advisory Committee and Medical Review Board released recommendations in 2012, including:

An FMCSA spokesperson said that, at press time, the agency was reviewing the recommendations from MCSAC and MRB and anticipates requesting public comment on proposed regulatory guidance “in the future.” Regulatory guidance eventually may lead to a rule requiring obstructive sleep apnea screening for truck drivers, according to FMCSA.

ATA prefers the rulemaking approach – with science-based outcomes and cost-benefit analyses – rather than regulatory guidance, according to a policy statement announced in October 2012.

Stephenson said that considering how involved the discussions on obstructive sleep apnea have been, and how much responsibility FMCSA would be placing on employers and medical examiners to monitor the condition, “it is very important that the agency goes through that process and checks the boxes so that the agency can say, ‘We did the research and the safety benefits do outweigh the things we will make you do.’”

Employee wellness programs focused on obstructive sleep apnea will be “critically important” for motor carriers going forward, said Stephen V. Burks, associate professor of economics and management at the University of Minnesota, Morris. Some carriers have begun using non-punitive screening and treatment programs for all employees that minimize interruptions to work schedules. Others have reduced barriers for employees, including eliminating co-pays and penalties for missing work to receive testing or treatment.

Gurubhagavatula encourages motor carriers to educate drivers on obstructive sleep apnea symptoms and how they affect crash risks, as well as the connection between obesity and the disorder (see “Obesity and sleep apnea in the trucking industry” below). Examples of educational materials or campaigns include providing publicly available BMI charts and lists of common symptoms.

The ultimate goal of an obstructive sleep apnea wellness program is for safety-sensitive personnel who have the condition to be aware of it and take steps to treat it, Gurubhagavatula said. The most effective and scientifically validated treatment for obstructive sleep apnea is continuous positive airway pressure therapy, she said, noting that workers who use CPAP machines tend to visit health care services less frequently, spend fewer days in the hospital, miss fewer workdays and experience lower rates of disability.

Gurubhagavatula said safety professionals should remind workers that safety is a 24-hour job, and drivers have a responsibility to get adequate sleep before working.

Obesity and sleep apnea in the trucking industry

Obstructive sleep apnea is estimated to affect between 13 and 28 percent of truck drivers. Why is the disorder so prevalent in the trucking industry?

One reason may be obesity, a characteristic shared by nearly 50 percent of truck drivers, according to Indira Gurubhagavatula, assistant professor of medicine at the Veteran’s Administration Medical Center in Philadelphia and director of occupational sleep medicine at the Perelman School of Medicine at the University of Pennsylvania. Obesity has been linked to an increase of soft tissues in the neck that can reduce or block airflow during sleep.

Stephen V. Burks, associate professor of economics and management at the University of Minnesota, Morris, was a truck driver for about a decade and recalls having very little control over his weight while working. Long-haul drivers, who make up about half of the industry, are mostly sedentary during their workday. In addition to irregular and unpredictable sleep schedules, a truck driver’s diet choices make gaining weight easy and taking it off difficult, he said.

“You eat at rest stops and fast-food places because most of the time you are time-constrained, and what is available is fast. And most of the time this is not particularly healthy from an obesity standpoint,” Burks said. “You add all these things up, and it’s not surprising in the occupation, especially long-haul, that it predisposes you toward additional weight gain.”

Obesity and obstructive sleep apnea have become major concerns in the trucking industry in recent years, said Boyd Stephenson, director of hazardous materials policy and licensing for the American Trucking Associations in Arlington, VA. ATA – which maintains relationships with rest-stop companies and restaurants – has been looking closely at making healthier food items available to truck drivers, he said. Some trucking companies are even hiring health coaches to work with drivers on managing their lifestyle at truck stops. For exercise, one company’s coaches suggest drivers walk 50 times around a tractor with a 50-foot trailer, which amounts to about 1 mile, he said.