We use cookies to provide you with a better experience. By continuing to browse the site you are agreeing to our use of cookies in accordance with our Privacy Policy.
Home » Drilling down
Federal agencies Statistics Mining, oil and gas Oil and gas
GOVERNMENT-INDUSTRY COOPERATION Employment is booming in the oil and gas industry. Russ Shinert, mid-continent unit safety director of Salt Lake City-based Savage, described the draw for workers: “It’s good, hard, honest work and you get paid well for it, and for the most part it’s long-term.”

But it can be dangerous. Preliminary data from the Bureau of Labor Statistics shows a record number of deaths in the oil and gas extraction sector in 2012 – even as workplace deaths trended downward overall. In total, 138 oil and gas workers lost their lives in 2012 – a 23 percent increase from 2011.

Secretary of Labor Thomas Perez expressed concern in an Aug. 22 statement regarding the BLS data. “Job gains in oil and gas and construction have come with more fatalities, and that is unacceptable,” Perez said. “Employers must take job hazards seriously and live up to their legal and moral obligation to send their workers home safe every single day.”

Through efforts such as a nationwide safety stand-down in November, OSHA and the oil and gas industry are collaborating to address the layers of dangers these workers face.

For nonfatal injuries, the recordable rates in 2011 were lower than the general rate for industries – 0.9 per 100 full-time workers for extraction, 3.0 for drilling and 2.1 for support activities, compared with 3.5 for all workers, according to BLS data. 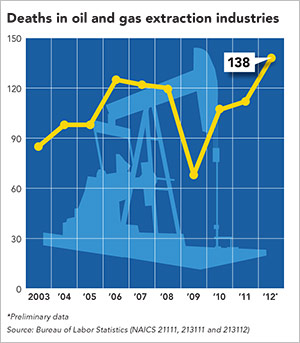 Regarding fatalities, Kyla Retzer, coordinator of NIOSH’s Oil and Gas Extraction Safety and Health Program, said motor vehicle crashes are the chief cause of death, followed by struck-by incidents involving a tool or equipment. Based on analysis of OSHA data, NIOSH has identified pipe handling, unexpected pressure releases and incidents involving powered industrial vehicles as hazards that require more research.

Retzer co-authored a study that cited several reasons for the higher death rate among extraction workers, including travel between well sites, low safety belt usage and fatigue due to working long hours – such as 12-hour shifts for seven to 14 days in a row. The study was published in the journal Accident Analysis and Prevention (Vol. 51).

“Many of the worksites are located on rural roadways or lease roads, which often don’t have the same safety controls that most of us take for granted – such as rumble strips, divided roadways, guard rails and even paved roadways,” Retzer wrote in an email to Safety+Health.

Other factors she named include performing repetitive physical labor, working with large tools, and driving long distances to work and while working. The industry also relies on contract workers to perform the most hazardous work, and small companies may lack the resources to employ a full-time safety and health professional or run a comprehensive program, Retzer said.

Based on NIOSH research, she offered three recommendations to help reduce both the number and rate of injuries:

OSHA and NIOSH are working with the oil and gas industry to address safety concerns. NIOSH already provides free videos on topics such as rig safety, safety belts and fall protection, and is developing an industry-specific surveillance system to collect fatality information, Retzer said.

On Nov. 14, OSHA, NIOSH and the National Service, Transmission, Exploration and Production Safety Network hosted a safety stand-down. The kick-off event in Humble, TX, included industry roundtables and case study presentations. OSHA also asked employers to set aside time after the event to share safety information with their workforce.

Additional efforts by OSHA include forming a workgroup to develop resources for workers, and launching a course on hazard recognition in oil and gas exploration and production.

One of the groups that participated in the safety stand-down was the International Association of Drilling Contractors, based in Houston.

Joe Hurt, vice president of IADC’s Onshore Division, said that in Texas the industry relationship with OSHA dates back to 2003, when then-regional administrator John Miles approached employers in an effort to develop a way OSHA could work closer with them to make workers safe. That resulted in an OSHA/industry alliance in south Texas, and Hurt said employers have gone from never wanting to be involved with OSHA to reaching out to the agency’s compliance assistance specialists.

“That effort in itself has helped the industry become safer way more so than any citations or new regulations they can write,” he noted.

Hurt stressed that the oil and gas industry has made strides, such as a large drop in the lost-time incident rate worldwide since 1968 while the number of drilling rigs has increased.

Noting that missteps make the news while safety improvements often go unreported, Hurt said his organization’s drilling contractors are investing in new rig designs and tools that are designed to take workers out of hazardous areas on the rigs. The International Association of Drilling Contractors’ member companies also have spent millions of dollars on training to improve worker knowledge of safety, he said.

In collaboration with industry professionals and experts, IADC is developing a database of knowledge, skills and abilities that workers need to be competent in different rig positions. When completed, employers will be able to type in the worker’s job title and type of rig, and then receive a list of the knowledge/skills/abilities that the worker should be competent in to safely perform the job. Hurt used the example of a driller, who should be competent in recognizing a well kick, supervising personnel and operating the rig.