We use cookies to provide you with a better experience. By continuing to browse the site you are agreeing to our use of cookies in accordance with our Privacy Policy.
Home » Workplace violence in health care
Workplace violence Safety culture
PART OF THE JOB?

Experts say 'part of the job' mindset needs to change

Dr. Melissa Barton has been slapped, kicked and shouted at by patients.

Once, a patient yanked Barton’s ponytail. Another time, a woman waiting impatiently for a pregnancy test in the busy emergency department threw a cup of urine at her.

Violence is a common workplace hazard for nurses and other health care workers. Barton, who is residency director at Sinai-Grace Hospital in Detroit and a spokesperson for the American College of Emergency Physicians, estimates that at least one verbal or physical threat occurs during each shift in Sinai-Grace’s emergency department.

“I can see where a culture change is needed,” Barton said.

According to Bureau of Labor Statistics data, the rate of workplace violence-related nonfatal occupational injuries and illnesses involving days away from work for health care and social assistance workers was 15.1 per 10,000 full-time workers in 2012. For private industry overall, the rate was 4.0.

Common factors associated with violence in emergency departments include long wait times, psychiatric patients, patients who have a history of violence and patients under the influence of drugs or alcohol, according to a study published January in the Journal of Emergency Medicine.

“I don’t think we’re where we need to be. It’s why we continue to do our work here,” Haebler said.

Although OSHA has no specific standards regarding workplace violence, several states recently have passed legislation to help strengthen penalties for assault on health care workers, and other states have established violence prevention programs.

The more popular approach among states is to increase penalties for assaults against nurses because it is easier to amend a law than “start from scratch,” Haebler said.

The Emergency Nurses Association is focused on harsher penalties. The Des Plaines, IL-based organization counts 31 states that have made it a felony to assault or commit battery against an emergency department nurse, and hopes the remaining states will follow suit.

Deena Brecher, president of ENA, said it is the organization’s goal to make violence against nurses a felony in all states, have a mandatory reporting structure and provide all nurses with education on mitigating workplace violence.

“The best way to equate it – it’s a felony in every state to assault a police officer,” Brecher said.

“It would be a public stance, our government saying we have to keep our workers safe,” Khare said. “It may actually decrease the amount of violence and may make [the process] easier and less time-consuming.”

According to Haebler, ANA would like to see Congress pass legislation that includes training to recognize and de-escalate potentially violent workplace situations. She noted that Maryland passed a law in May requiring health care facilities to establish a workplace safety committee and program to help prevent physical assault or threatening behavior against workers. Still, many health care worker advocates want all facilities to implement training and education to help prevent incidents. Changing the culture is vital, Brecher said, because some nurses and their co-workers believe contending with disorderly patients is part of the job. And Khare pointed out that health care workers sometimes refrain from reporting incidents because the process is time-consuming and emotional.

“Just because a law is on the books doesn’t mean someone is going to use it,” Brecher said. “We have to get nurses and other providers to report violence. We have to get them to understand it’s not part of the job.” 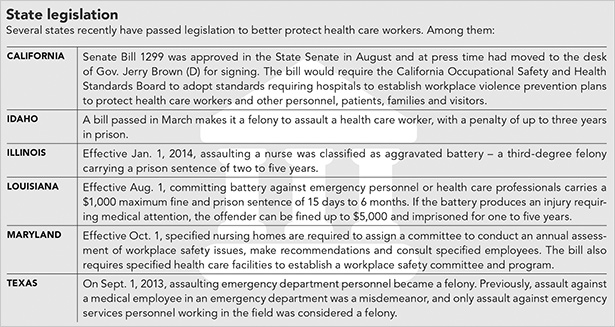 Lessening the impact of incidents is part of the solution, Brecher said. That includes making sure work environments allow nurses to easily escape a hostile situation, and that they can call for help, recognize potentially violent situations and de-escalate them, and have a working relationship with law enforcement and security.

“There are a lot of parts that need to happen with mitigation and preparation,” Brecher said.

For more tools on preventing workplace violence in the health care industry, go to ENA.org and OSHA.org.

Barton said her hospital has made strides to prevent violence. She traces the culture shift back about eight years, when the facility’s new head of security spread the word that violence would not be tolerated. Security officers now undergo more training, and social workers are made available to patients. Cameras monitor the emergency department, and officers are stationed at the front entrance, she added.

“It’s gotten better in the last 10 years in our hospital,” Barton said. “I feel safer.”