We use cookies to provide you with a better experience. By continuing to browse the site you are agreeing to our use of cookies in accordance with our Privacy Policy.
Home » Updated OSHA agenda reflects Trump administration's focus on de-regulation
Federal agencies 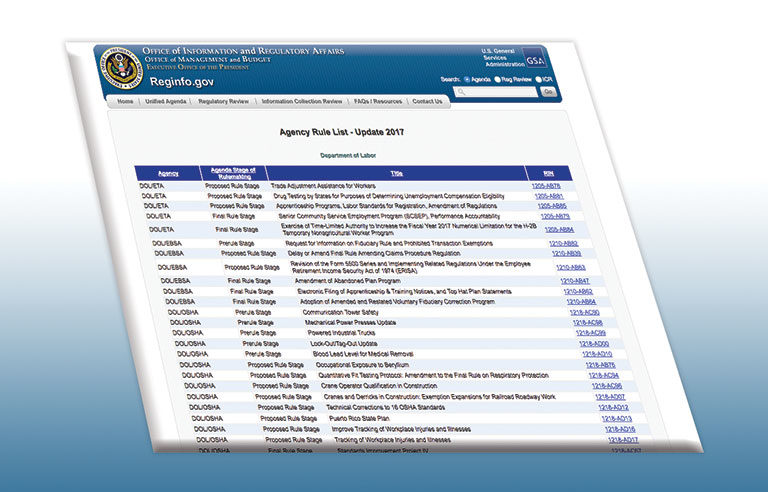 As expected under the new administration, potential regulatory action from OSHA has been cut by more than half, according to the Department of Labor’s updated agenda released July 20.

The report, typically published twice a year, lists the statuses of and projected dates for all regulations. The updated agenda lists 14 OSHA regulations in three different stages – pre-rule, proposed rule and final rule – compared with 30 on the fall 2016 agenda.

Overall, 469 proposed federal regulations have been withdrawn and a combined 391 have been reclassified as “long-term” or “inactive” to allow for “further careful review.”

“This agenda represents the beginning of fundamental regulatory reform and a reorientation toward reducing unnecessary regulatory burden on the American people. By amending and eliminating regulations that are ineffective, duplicative and obsolete, the administration can promote economic growth and innovation, and protect individual liberty,” the agenda’s preamble states.

President Donald Trump signed an Executive Order on Jan. 30 requiring federal agencies to cut two regulations for every new one that is proposed. The White House published a guidance memo three days later clarifying that the Executive Order would apply only to those regulations with a proposed cost of $100 million or more.

Only one OSHA regulation, Standards Improvement Project IV, is listed as being in the final rule stage, in part because the Occupational Exposure to Beryllium final rule was moved back to the proposed rule stage on June 27. Under the new administration, OSHA is seeking to remove specific provisions regarding worker exposure in construction and shipyard industries.

The final rule on beryllium went into effect May 20. In the interim, OSHA stated that it is not enforcing it in the two industries and is seeking comments on its new proposal until Aug. 28.

President Trump also signed a Congressional Review Act resolution on April 4 to strike down the “Volks” rule, which was published in December. That regulation allowed OSHA to issue citations for inadequate injury and illness recordkeeping for five-and-a-half years instead of the current six-month statute of limitations. In May, five members of Congress introduced the Accurate Workplace Injury and Illness Records Restoration Act, which would reinstitute the “Volks” rule, but that bill remains in committee.

Also removed from the regulatory agenda:

“In his first speech as President of the United States, Donald Trump pledged that every decision he made would be to benefit the nation’s workers,” Christine Owens, executive director of the National Employment Law Project, said in a July 20 statement. “The administration’s Spring Regulatory Agenda reflects yet again just how hollow the president’s promise has been.”

Along with the rulemaking on beryllium, proposed rules carried over from fall 2016 or added to the agenda include:

Much of the agency’s Walking-Working Surfaces and Personal Fall Protection Systems final rule, issued in November 2016 under the Obama administration, has gone into effect since January, and three of its six remaining provisions are scheduled to be phased in by the end of this year.