We use cookies to provide you with a better experience. By continuing to browse the site you are agreeing to our use of cookies in accordance with our Privacy Policy.
Home » Safer work zones
Construction Injury prevention Construction

Education and innovation may help move the needle For years, C.A. Hull President and CEO Mike Malloure tried to move the needle on roadway work zone safety. But when an employee of his Walled Lake, MI-based construction company was killed in a work zone crash in June 2018, he went to Kirk Steudle, then the director of the Michigan Department of Transportation, and said the efforts couldn’t wait any longer.

The task force, which launched in October 2018, is a partnership between MDOT and the state’s heavy construction industry. It’s divided into seven teams and has more than 90 members, who focus on areas ranging from law enforcement and education to technological innovations.

Among the task force’s stated responsibilities are helping implement safety recommendations and “being the catalyst” for a change in work zone safety culture.

Associate Editor Alan Ferguson discusses this article in the April 2020 episode of Safety+Health's “On the Safe Side” podcast.

The Bureau of Labor Statistics has recorded fatal occupational injuries on road construction sites since 2003. The data shows an annual average of 123 worker deaths over a 16-year period, with 124 in 2018. In 2013, the total was 105, but increased each of the next three years to reach 143 in 2016.

Data from the National Highway Traffic Safety Administration – which records all deaths within work zones, not only worker deaths – shows an annual average of 745 such fatalities since the beginning of 2014.

A significant number of these deaths resulted from workers being struck by vehicles or other equipment, such as a car entering the work zone (known as an intrusion) or an incident involving vehicles operating within the work zone.

A study published by CPWR – The Center for Construction Training and Research in 2018 shows that most fatal work zone incidents between 2011 and 2016 were the result of intrusions. Of the 267 vehicle-related fatalities recorded during the study period, 61.4% were caused by forward-moving vehicles, while 24.7% resulted from backover incidents.

Chris Engelbrecht, assistant to the chief safety and operations officer of the Missouri Department of Transportation’s Safety and Emergency Management Unit, said distracted driving is a contributing factor in some work zone intrusions. Others include speeding, an increasing number of road construction projects, and more drivers on the road because of relatively stable fuel prices that, in turn, increase the number of miles driven.

He said the use of trained spotters is another way to enhance worker safety, along with instructing employees to remain alert at all times. Before any equipment is used within a work zone, operators should perform a “circle check” – or a 360-degree walkaround – and check blind spots for workers on foot. 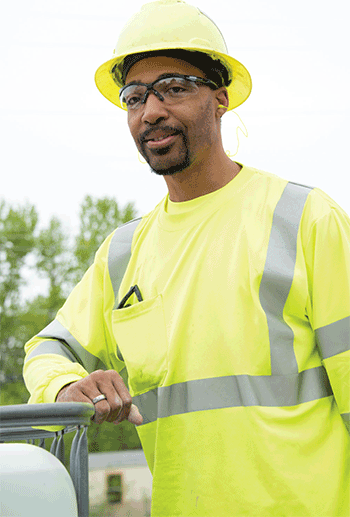 Workers on foot need to be seen, so employers should comply with the ANSI/ISEA 107-2015 standard for high-visibility clothing.

Bradley Sant, senior vice president of safety and education at the American Road and Transportation Builders Association, said his organization has pushed for the use of “positive separation.” This means using physical barriers (e.g., concrete) that are effective at stopping an intruding vehicle. These barriers, however, can be more expensive than others that are less sturdy and often are more difficult to haul. Sant said this typically is a consideration for road builders designing short-term projects.

“While we would like to see more (positive separation), it may simply be infeasible for short-term projects,” Sant said.

He called on employers and designers to consider positive separation alternatives, including more lightweight steel barriers or mobile barriers, one of which he desribed as being like a trailer hooked onto the back of a truck.

“You can drive it in for a short-term or short-duration job, lock the barrier down while you’re doing the work, then unlock it and drive away,” Sant said.

Smarter Work Zones is an initiative of the Federal Highway Administration’s Every Day Counts program. Visit highways.dot.gov or workzonesafety.org/swz for more information.

States and road construction employers are also turning to technology for help. Many use electronic signage, also known as queue warning systems, to provide drivers with up-to-date construction and/or traffic information as they approach work zones.

This warning can help prevent rear-end collisions or drivers from swerving into work zones to avoid one.

One exposure control strategy, Engelbrecht said, is substituting human flaggers with Automated Flagger Assistance Devices, which are operated remotely. Also available are alarms that warn workers that a vehicle is intruding in the work zone. Additionally, programs that use algorithms to predict when an intrusion might occur and then warn workers ahead of time, giving them precious seconds to get out of harm’s way, are expected in the near future, Sant said.

On the educational side, ARTBA has launched a safety certification for transportation project professionals to create a national baseline for work zone professionals. This will help ensure those who make critical safety decisions can demonstrate basic understanding of the hazards “unique to transportation construction.”

“We’re trying to promote across the industry that if you’re going to be leading crews on roadway construction sites, even as a company owner, you ought to know the basic facts about traffic control and occupational safety, and the intersection of the two,” Sant said.

The mission of the Michigan Work Zone Safety Task Force is to get all stakeholders aligned toward better work zone safety.

“We tried to make sure that the membership is equally balanced,” Kratofil said, “and we intentionally tried to get people that maybe haven’t always been at the table on this but are actively involved in operating or managing work zones so that we could get fresh ideas and not necessarily always revert to kind of the same things.”

That included getting the Prosecuting Attorneys Association of Michigan on board. Law enforcement can issue tickets to work zone violators, but the penalties are more effective when prosecutors follow through in the court system, Kratofil said.

Malloure gave other examples of stakeholders who aren’t typically represented in work zone safety efforts, such as the MDOT maintenance team and driving educators. Malloure and Kratofil noted that some private driver’s education schools in the state instruct their students to steer clear of work zones for liability reasons, but argued that it denies the students – often young drivers – the opportunity to learn how to navigate a work zone safely.

Another example: road construction engineers. Involving engineers allows them to see the work zones from various stakeholders’ perspectives and observe the challenges workers and drivers face in the field. That way, they can understand ways to provide better work zone and roadway design “on the front end,” Malloure said.

“It’s all of us in partnership together pushing for a change for the better – for everyone,” he added.

“Men and women who have families are sticking their necks out to build a better road,” he said. “It’s behaviors of people that are going to make us safer or not. It’s changing the behaviors of people – motorists, workers and contractors, too, DOTs and everybody.”

Kratofil said one of the most important roles of the task force is to get people, from all areas, to avoid becoming complacent when it comes to work zone and other traffic fatalities.

“We all probably know somebody that was injured or killed in a traffic crash,” he said. “Because they aren’t big events, like a plane crash or something like that, we’ve just become numb to it. That’s what we want to help achieve with the task force, is get out of our numbness on this and put more attention on this.” 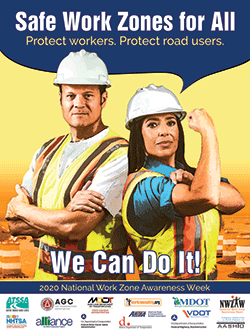 National Work Zone Awareness Week is scheduled for April 20-24. However, the national kickoff event set for April 21 at the American Center for Mobility in Ypsilanti, MI, has been cancelled in accordance with the Centers for Disease Control and Prevention’s coronavirus (COVID-19) pandemic guidelines.

More information is available at nwzaw.org.

On the Safe Side podcast Episode 2: Roadway work zones