We use cookies to provide you with a better experience. By continuing to browse the site you are agreeing to our use of cookies in accordance with our Privacy Policy.
Home » The Hierarchy of Controls
Workplace exposure Injury prevention

The Hierarchy of Controls

A step-by-step path to eliminate or reduce hazards 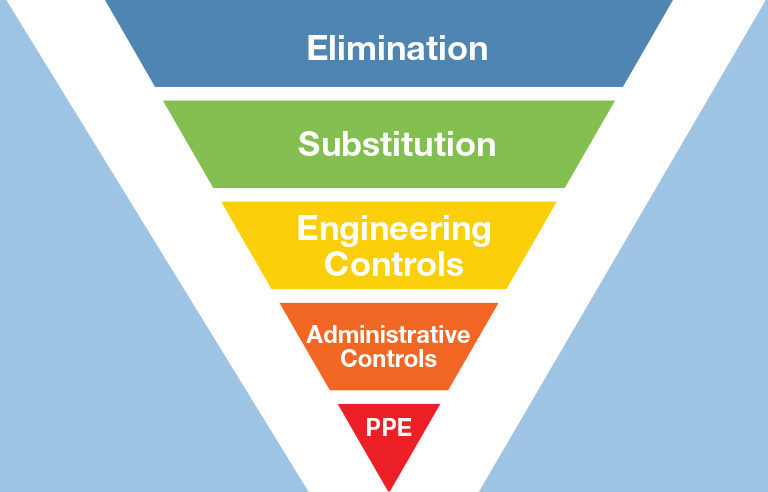 Are you familiar with the Hierarchy of Controls? Featuring an inverted pyramid, it’s a framework and a visual guide for controlling workplace hazards and protecting employees.

Substitution – Replace the hazard with a safer alternative

“Following this hierarchy normally leads to the implementation of inherently safer systems, where the risk of illness or injury has been substantially reduced,” NIOSH says.

“Elimination removes the hazard at the source,” NIOSH says. “This could include changing the work process to stop using a toxic chemical, heavy object or sharp tool. It is the preferred solution to protect workers because no exposure can occur.”

The agency acknowledges that although elimination and substitution are the most effective at reducing hazards, they’re often the most difficult measures to implement for an existing process.

“If the process is still at the design or development stage, elimination and substitution of hazards may be inexpensive and simple to implement. For an existing process, major changes in equipment and procedures may be required.”

Once you move below elimination on the hierarchy, some risk likely will be involved, cautions Thomas “T.J.” Lentz, lead health scientist and chief of the NIOSH Science Applications Branch.

“You could possibly get to zero risk with substitution, but only with elimination are you accomplishing that by removing the hazard completely.”

Replace the hazard with a safer alternative

Substitution can come in many forms. Jonathan Bach, director of NIOSH’s Prevention through Design initiative, pointed to two that stem from the chemical industry: minimization and simplification.

Examples of minimization are using smaller quantities of a hazardous material, a lower voltage of energy, and reduced temperatures or pressures.

Simplification is the process of reducing unnecessary complexity; confusion caused by instructions, labels or signs; or the number of steps to complete a task.

“Simplification, in my mind, can also be considered a type of substitution,” Bach said. “You’re substituting something simpler instead of something complex. You’re improving the reliability that way.”

Isolate people from the hazard

Types of engineering controls to separate workers from a hazard include ventilation – especially relevant during the COVID-19 pandemic – guardrails and machine guards.

Bach and Lentz said additional resources for engineering controls include CPWR – The Center for Construction Re-search and Training, OSHA, and reports from the NIOSH Fatality Assessment and Control Evaluation Program (as well as OSHA’s and NIOSH’s state-level counterparts).

Examples of administrative controls include rotating workers to limit their exposures to a hazardous substance, scheduling work at cooler times of the day during the summer and restricting access to a dangerous area in a workplace.

“Administrative controls and PPE are frequently used with existing processes where hazards are not particularly well controlled,” NIOSH says, adding that these two kinds of controls are relatively inexpensive initially but “can be very costly to sustain.”

That’s because they can require extensive oversight or continuous training and supervision, Lentz said.

When it comes to PPE, the long-stated piece of advice in the safety world is: Don’t just turn to it without first exploring other control options.

“You shouldn’t take necessarily the easiest route or use that as a permanent solution when there are other options that are probably more reliable, more effective in the long run,” Lentz said.

“That said, I think it often gets short shrift because we do recognize that there are cases where it is not the only option, but it’s one of the important options, for ensuring people remain safe.”

Months after turning 40 in 1967, Bach’s father, Oliver, died of kidney failure caused by exposure to industrial chemicals. Although those hazards could’ve been designed out, Bach said, PPE would have helped as well.

“PPE is crucial and will always be needed. It would have worked for my father, as would any of the controls further up the hierarchy.”

When progressing through the Hierarchy of Controls, take time and proximity into account, Bach said. Time includes working early in the work process – or, better yet, in the planning process – to control hazards, rather than later. 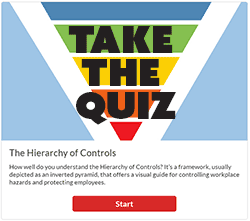 Regarding proximity: Be aware that toward the top of the hierarchy, the objective is to control the source of the hazard. Toward the bottom, the goal is to protect the worker and/or others from potential harm.

Additionally, controls are either passive or active. At the top of the hierarchy, a worker won’t need to play a role to help control the hazard, but will need to become more of an active participant farther down the hierarchy. “Even with engineering controls, some of them require more actions by the workers and the management than others, whether it’s filter changes, maintenance inspections or just flipping switches,” Bach said.

The more actions needed, the more the “must trust” factor comes into play, he cautioned. For example, employers will have to trust workers to wear PPE correctly every time, while workers will have to trust that their employer will provide the proper PPE. The farther you go up on the hierarchy, reliance on or trust in sometime fallible people is less of a factor.

At the top of the hierarchy, a worker won’t need to play a role to help control the hazard, but will need to become more of an active participant farther down the hierarchy.

How to use the hierarchy

Trying to determine which control methods to use? OSHA has a guide on hazard control and prevention.

Along with using the hierarchy to “identify and evaluate options,” employers are advised to:

If necessary, use interim controls until long-term solutions are put in place.

Bach noted that the American National Standards Institute/American Society of Safety Professionals Z590.3 Prevention through Design standard stresses that it’s preferable to avoid hazards up front rather than having to work to eliminate them later. The voluntary standard emphasizes “the importance of doing design safety reviews of a new process” or any other similar changes in the workplace. That review may involve a team of people, including safety and health personnel.

NIOSH says its PtD initiative “encompasses all of the efforts to anticipate and design out hazards to workers in facilities, work methods and operations, processes, equipment, tools, products, new technologies, and the organization of work.”

The PtD mission is to:

“Whenever possible, select equipment, machinery and materials that are inherently safer based on the application of PtD principles,” OSHA says. “Apply PtD when making your own facility, equipment or product design decisions.”

On the Safe Side podcast Episode 25: Storm recovery safety and the many facets of PPE

On the Safe Side podcast Episode 6: The value of soft skills