We use cookies to provide you with a better experience. By continuing to browse the site you are agreeing to our use of cookies in accordance with our Privacy Policy.
Home » OSHA’s proposal on electronic injury and illness data submission moves to final rule stage in latest regulatory agenda
NSC Business and Industry Division news NSC Construction and Utilities Division news NSC Labor Division news Federal agencies Regulation Mining_Oil_Gas 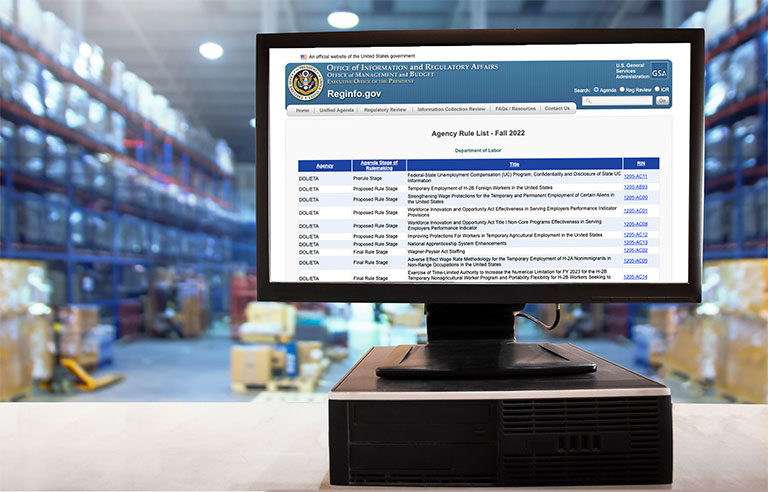 Washington — OSHA’s regulation to change which workplaces are required to submit annual injury and illness data is at least one step closer to finalization, according to the Department of Labor’s just-released Fall 2022 regulatory agenda.

Published Jan. 4, the agenda – typically issued by the White House Office of Information and Regulatory Affairs twice a year – provides the status of and projected dates for all potential regulations listed in three stages: pre-rule, proposed rule and final rule. The Spring 2022 agenda was issued June 21.

Under OSHA’s current electronic injury and illness data submission rules, establishments with 250 or more employees and those with 20-plus employees in certain high-hazard industries must submit Form 300A – a yearly summary of injury and illnesses data.

A final rule could appear as soon as March. OSHA’s forthcoming standard on COVID-19 in health care settings is among the agency’s other seven potential regulations listed in the final rule stage. That standard is under final review by OIRA.

Added to that list since June: Procedures for the Use of Administrative Subpoenas. An interim final rule could come as early as June.

“OSHA makes extensive use of subpoenas to gather evidence and interview witnesses during its investigations,” the agenda states. “This subpoena practice raises recurrent issues which lead to time-consuming disputes between the agency and employers. OSHA intends to adopt a regulation addressing the use of subpoenas during OSHA investigations to provide helpful clarity to the agency and the regulated public on these issues, while promoting transparency and uniform subpoena practice across the agency.”

OSHA has one new proposed rule designed to “clarify” the process of designating a worker representative during an OSHA inspection or facility walkaround, “regardless of whether the representative is an employee of the employer, if in the judgment of the compliance safety and health officer such person is reasonably necessary to an effective and thorough physical inspection.”

A notice of proposed rulemaking could appear as soon as May.

Mine Safety and Health Administration

MSHA, meanwhile, has three new entries to the “semiannual” agenda, but all three are on the long-term actions list, meaning no work or updates are expected on these potential regulations for at least six months.

One concerns proposed safety requirements for mining around inactive or plugged oil or gas wells. Another seeks to change existing rules on radon exposure, and the third is on impoundment and dams.

“The general public would benefit from this rulemaking since failure of impoundments and dams is a significant hazard for the safety and health of miners and the surrounding communities,” MSHA says.

The agency’s planned retrospective look at its respirable coal mine dust rule and another regulation on non-permissible surveying equipment were moved from the active list to the long-term list.