We use cookies to provide you with a better experience. By continuing to browse the site you are agreeing to our use of cookies in accordance with our Privacy Policy.
Home » Blogs » On Research » Detecting carbon monoxide danger

The "On Research" blog has been discontinued, but you may be interested in reading the "On Safety blog."

What if construction helmets could do double-duty: protecting workers from carbon monoxide poisoning as well as head injuries?

New research from Jason Forsyth, a Ph.D. candidate at Virginia Tech, indicates it may be possible to equip a helmet with a sensor to monitor carbon monoxide levels in the blood, thereby alerting workers to danger before it’s too late. Forsyth and his team earned the Best Paper Award at the Institute of Electrical and Electronic Engineers Conference on Automation Science and Engineering in August.

“People know the issues related to carbon monoxide, but the problem is you can’t tell if you’re being poisoned,” Forsyth said.

He wanted to devise a system to continuously monitor the carbon monoxide level of individual workers, rather than simply monitor the site, because a worker’s susceptibility may vary based on his or her physiological makeup. For example, someone who is anemic or has respiratory problems may be at higher risk.

The pulse oximetry sensor used in the study measures the level of oxygen in the blood, and the technology could easily be adapted to monitor carbon monoxide, Forsyth said. You’ve probably had this type of sensor placed on your finger during a doctor’s visit. But wearing a sensor on the hand would be impractical for workers handlling tools, so Forsyth focused on the helmet – a piece of personal protective equipment that construction workers wear all the time. 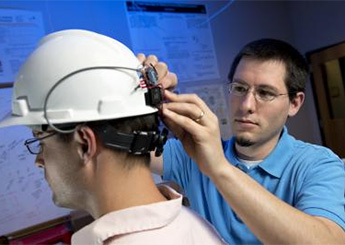 Jason B. Forsyth (right), a Ph.D. candidate in computer engineering at Virginia Tech, places a wearable computing system on a helmet to protect construction workers from carbon monoxide poisoning.

To test the helmet technology, 10 college students acted as construction workers by performing actions such as walking, hammering, moving boxes and climbing stairs. Researchers then recorded the workers’ oxygen levels obtained from the sensors, and results showed that the helmet design would capture accurate readings and be able to alert the worker before poisoning occurred.

Now that Forsyth has proved the sensor technology is reliable in construction settings, the next step is to put the helmet on real workers to monitor more activities and determine whether other factors – such as sweat, dirt, and head caps or bandanas – affect the sensor.

“I think it has the potential to protect workers in situations such as construction or even mining where they are using hand-powered tools, gasoline- or diesel-powered tools,” Forsyth said. “I think by integrating it into the helmet it would be non-intrusive, the users wouldn’t even know it was there.”

Workers, what do you think? Would you use this technology?

The opinions expressed in "Research Spotlight" do not necessarily reflect those of the National Safety Council or affiliated local Chapters.