We use cookies to provide you with a better experience. By continuing to browse the site you are agreeing to our use of cookies in accordance with our Privacy Policy.
Home » Starting the conversation: OSHA mulls update to HazCom Standard
Hazard communication GHS/Hazcom Manufacturing James Lee held up a capsule about the size of a pharmaceutical pill to a room full of OSHA staff and safety professionals.

The capsule, created by Loveland, CO-based Hach Co., is used by municipalities worldwide and researchers to test chlorine levels in water. The capsule was designed to be small to minimize potential safety and health issues for workers who use them.

However, a big problem exists, said Lee, a senior compliance analyst with Hach. The pill has a minuscule surface, which makes it challenging to include the labeling required by OSHA’s Hazard Communication Standard (1910.1200) and the Globally Harmonized System of Classification and Labeling of Chemicals, or GHS. 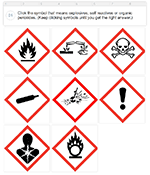 How well do you know the Globally Harmonized System of Classification and Labeling of Chemicals pictograms? Find out by taking a short quiz created by Safety+Health.

“It took a lot of time putting a small label onto this. I don’t even know if you can read it,” Lee said. “We were able to put in one pictogram. We had hundreds of employees last year sitting in a cafeteria labeling these things manually because we could not find a printer to do it automatically.

Lee was participating in the agency’s informal discussion about the Hazard Communication Standard on Nov. 16 in Washington. During the nearly three-hour meeting, OSHA sought feedback from stakeholders about topics that the agency should consider as part of its next revision of the standard.

As for when the next revision will occur, nobody can say for sure – particularly with a change in administration approaching. But OSHA officials want to start the conversation as they look to update the standard to align it more closely with GHS.

OSHA’s most recent revision to the Hazard Communication Standard occurred in 2012. The agency promoted the revision by declaring on its website: “The standard that gave workers the right to know, now gives them the right to understand.” The revision also provided “a common and coherent approach to classifying chemicals and communicating hazard information on labels and Safety Data Sheets.”

“The point of that revision was [to include] the Global Harmonization System proposals that they have been working on for more than a decade,” said Huggett, who also participated in the Nov. 16 meeting. “The attempt in that rulemaking was to bring the United States into line with the rest of the world so employers that have chemicals that cross boundaries internationally can share the same Safety Data Sheet on the chemical and not have to create revised versions for every country that you may go into.

“When they finally published the final rule, unfortunately, it wasn’t quite a 100 percent matchup. The U.S. still has requirements that are different than Europe because OSHA wanted to maintain a number of things that they had that weren’t in the European versions of Safety Data Sheets. So we didn’t quite get to the whole point of doing the revisions in the first place, but it resulted in changes to the Safety Data Sheets, to labeling of hazardous chemicals and other information.”

“The purpose of adopting GHS was for harmonization,” Dunsmore said. “As most responsible parties know, U.S. rules were not really harmonized with other countries’ GHS adoptions. Would OSHA consider making an exception, allowing GHS labels in compliance with other countries to continue to use those labels here in the United States without the need to re-label?”

“At this point in time, we have indicated through interpretations that one must follow our criteria that we set forth in the Hazard Communication Standard,” Ruskin said. “If you can provide us information on how we can maintain our steps while accepting other countries’ labels, this is something that we will address in our discussions of the rulemaking.”

OSHA does not plan to significantly overhaul the standard. The agency stated that it intends to modify only the provisions that need to be changed to align with GHS – the basic framework will remain the same. Key tenets:

OSHA recently hosted an informal discussion on its Hazard Communication Standard. The agency may pursue an update to the standard, which was last revised in 2012. Below is an overview of OSHA’s rulemaking process.

Huggett said many employers he represents would prefer a more harmonized system.

“One of the disappointments of the [2012] rulemaking that took so long in the first place was that we didn’t actually get to the Globally Harmonized System,” Huggett said. “Anybody working internationally still has to create multiple documents now. Frankly, moving toward a provision that would indeed make something universal was the original goal, and a change like that would be welcome to most employers. You now have to create a Safety Data Sheet that is for use in the United States, and another one that is for use in Europe, and potentially additional ones around the globe.

“The rest of the globe is much more harmonized than the U.S. had been prior to this rule, and we’re a lot closer now, but there still are distinctions. Employers have to create a new sheet for a particular jurisdiction and make sure it’s distributed, make sure it’s maintained and, when revisions are needed, update multiple documents.”