We use cookies to provide you with a better experience. By continuing to browse the site you are agreeing to our use of cookies in accordance with our Privacy Policy.
Home » Safety pros should take their work home, Occupational Keynote speakers say
Show Daily 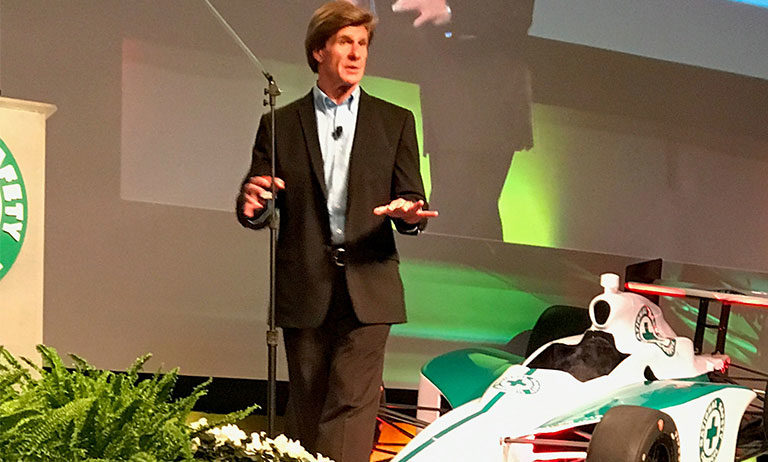 Indianapolis – Everyone has had near misses and minor and major injuries – on and off the job. These incidents are highly common, but, as safety professionals Larry Wilson and Tim Page-Bottorff pointed out, they also are highly preventable.

Wilson and Page-Bottorff spoke during the Occupational Keynote on Tuesday at the 2017 National Safety Council Congress & Expo. One of the keynote’s central themes was a message for safety pros: Take your work home. Three times as many unintentional disabling injuries – and 15 times as many accidental deaths – occur when workers are off duty than when they are on, the speakers said.

“We’re doing all we can for workplace safety, but we’re not carrying that home,” said Wilson, CEO of SafeStart.

Wilson and Page-Bottorff, senior safety consultant at SafeStart, identified three sources of unexpected incidents: you, other workers and equipment. And NSC data backs it up: 97 percent of injuries are caused by one’s self, and 97 percent of auto-related incidents are caused by human error, council data shows. The top contributing factors include rushing, frustration, fatigue and complacency, with eyes and minds wandering from the tasks.

To help limit these mistakes, Wilson and Page-Bottorff highlighted critical error reduction techniques: Self-triggering, or recognizing in the moment your potentially dangerous actions or inactions and correcting them; analysis of close calls and small errors to prevent repeating; seeing mistakes and good practices in others as reminders; and working on your safety habits.

“If we get people to put a bit of effort into these four [CERTs], we can help them to prevent critical errors, and also to prevent injuries,” Wilson said.

Wilson shared with keynote attendees an interview he did earlier this year with former OSHA chief David Michaels. Wilson asked Michaels what he thought the future held for workplace safety. Michaels said that he thought there likely wouldn’t be more OSHA inspectors to monitor sites, even if more regulations are issued in the future. Michaels also shared his thoughts on the prospect and types of regulations to come.

“The direction, I think, is more program regulations, telling employers, ‘You’ve got to look at this issue, look at this risk, and then take affirmative action,'” Michaels said. “That way we’ll have a level playing field.”