We use cookies to provide you with a better experience. By continuing to browse the site you are agreeing to our use of cookies in accordance with our Privacy Policy.
Home » Spring 2021 regulatory agenda: OSHA will seek to restore injury and illness recordkeeping requirements
Federal agencies Mining_Oil_Gas 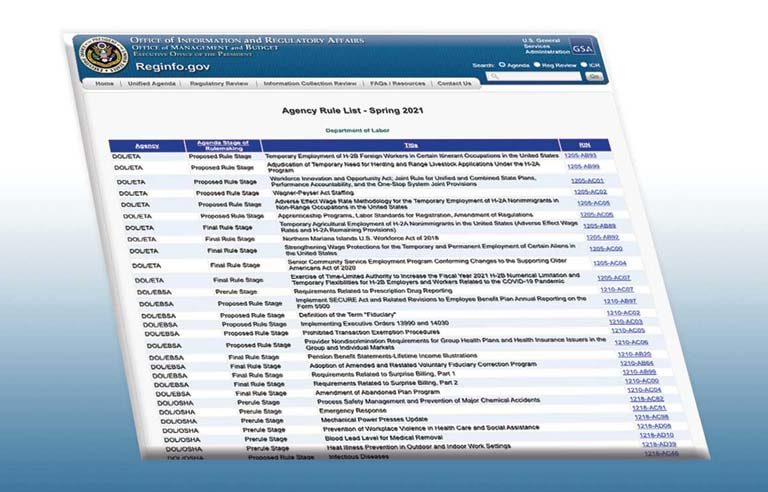 Washington — As expected, the Department of Labor’s regulatory agenda for Spring 2021 – the first under the Biden administration – features some changes, most significantly a forthcoming proposed rule from OSHA that would restore two parts of the agency’s injury and illness recordkeeping regulations.

Released June 11, the agenda – issued by the Office of Information and Regulatory Affairs twice a year – gives the status of and projected dates for all potential regulations listed in three stages: pre-rule, proposed rule and final rule. Listings marked “long term” aren’t expected to be worked on for at least six months.

OSHA will propose that establishments with 250 or more employees provide electronic submissions of their injury and illness data from Forms 300 and 301. The agency currently requires submission of only Form 300A – a yearly summary of injury and illness data – instead of the two more detailed forms. The agency’s Improve Tracking of Workplace Injuries and Illnesses final rule, issued in May 2016, required those employers to submit all three forms. Under the Trump administration, OSHA changed the rule in February 2019 to require only Form 300A. A notice of proposed rulemaking is scheduled to be published in December.

Three OSHA regulations moved from the long-term list to the active one, with perhaps the most notable being the standard on infectious diseases, which now appears in the proposed rule stage. An NPRM is scheduled to be published in December, about six months after OSHA issued an emergency temporary standard on COVID-19 that focuses on health care workers. The other two regulations that moved from the long-term list:

Two regulations that moved to the long-term list from the active list are a powered industrial trucks update and OSHA’s rule on drug testing and safety incentive programs.

New on the active list is a regulation on preventing heat illness in outdoor and indoor work settings, listed in the pre-rule stage.

Along with the forthcoming OSHA ETS, five other regulations are listed in the final rule stage. Two of the three holdovers from the fall regulatory agenda concern the handling of retaliation complaints under the Taxpayer First Act of 2019 and whistleblower protection statutes.

Two new entries at that stage concern the handling of retaliation complaints under the Anti-Money Laundering Act of 2020 and the Criminal Antitrust Anti-Retaliation Act of 2019.

The Mine Safety and Health Administration has one regulation listed in the final rule stage: Testing, Evaluation, and Approval of Electric Motor-Driven Mine Equipment and Accessories.

Two regulations were removed from the agenda. One proposed to rescind OSHA’s reporting requirements of injuries resulting from mechanical power presses – 1910.217(g). The other is MSHA’s rule titled Exposure of Underground Miners to Diesel Exhaust, which was in the pre-rule stage.