We use cookies to provide you with a better experience. By continuing to browse the site you are agreeing to our use of cookies in accordance with our Privacy Policy.
Home » My Story: Chris Malicki, CRIS, OHST, CHST
My Story 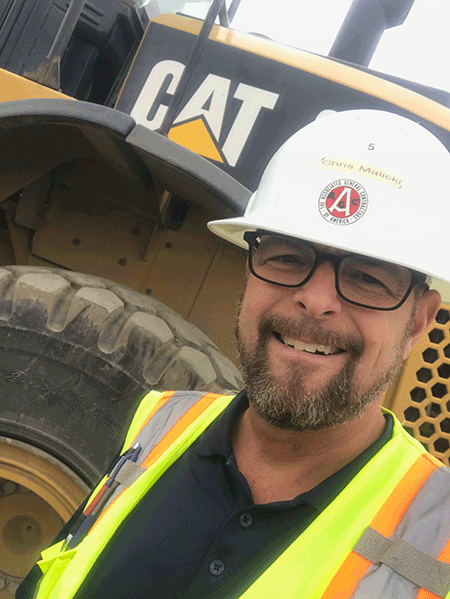 My story is probably not all that different than 95% of the safety and risk control people in America. I received my indoctrination in workplace safety in 1992 while working for a small mobile laboratory operation in Solana Beach, CA. One day the owner stopped at my desk, dropped a comb-bound document in front of me and said something akin to, “Malicki, that’s an IIPP. We start a soil vapor project at Camp Pendleton in a few weeks, and you are our safety officer. Figure it out and be ready.” Thus began my career as a safety professional.

A huge influence in my life, my father worked for the same company, a major manufacturer in Minneapolis, for over 42 years. If memory serves correctly, he started there about 1952. I believe during that time not a lot of emphasis was put on worker safety across the board. My dad worked on an assembly line for many years without the benefit of hearing protection. In the early 1970s, he started bringing home little Christmas-tree shaped plastic devices, which he called earplugs. He refused to wear them because they were very uncomfortable, as they were made of hard plastic. In short order, there was a collection of them in the junk drawer in our kitchen.

Life as a kid was very interesting at home. The TV was always blaring, Johnny Cash was always at the highest volume on the car radio and mom was always perturbed that dad talked so loud. This, of course, was all evidence of his diminishing ability to hear.

He continued to work there for another 20 years or so, taking advantage of various types of personal protective equipment, as he wasn’t so ignorant to think that he didn’t need to protect himself in some cases, especially chemical exposures.

In 2012, I got that phone call from my mom that no son wants to get. She said something like, “Dad’s taken a turn for the worse. He’s in hospice, and you should really reach out to him.” Of course, I knew that was impossible because by that point he was unable to talk on the telephone effectively, as his hearing was too far diminished.

My father made the decision not to wear hearing protection in the early 1970s, and it affected me personally 40 years later, when I could not call and say goodbye.

Why does all of this matter? Here’s the reason. I commonly find younger workers making bad decisions such as standing on the top of an A-frame ladder. When I ask them about their behavior, the generic answer is most always, “Hey man, I only needed to go up there to do one quick thing, there was no harm in it.” They fail to recognize that frequent bad decision-making will eventually catch up to them and lead to major catastrophe. At that point, I typically remind them that just maybe someone special may be waiting at home for them – dog, wife, boyfriend or child.

As a safety risk advisor for a commercial insurance broker and an OSHA outreach instructor, I tell this story at least five or 10 times a year, especially to the younger generation. I like to think that a few hundred people have heard the story over the years, and maybe a handful of them will reap the benefits of hard lessons learned by others and avoid a loss themselves.