We use cookies to provide you with a better experience. By continuing to browse the site you are agreeing to our use of cookies in accordance with our Privacy Policy.
Home » On Safety: OSHA’s current regulatory agenda ‘disappointing’
On Safety 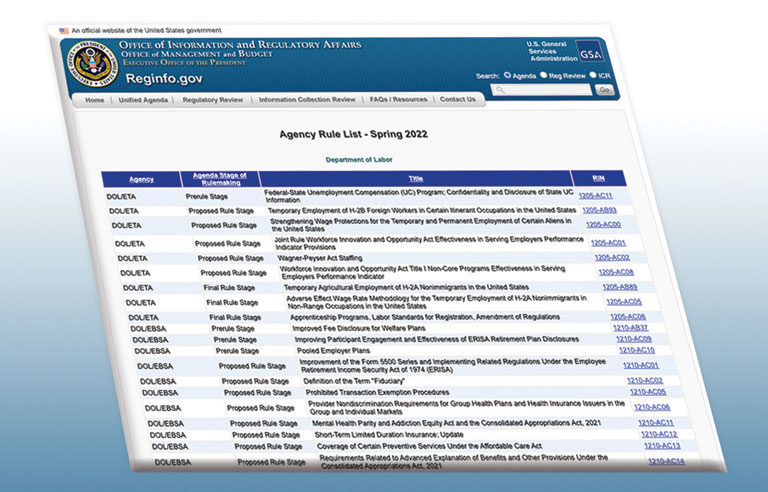 The Department of Labor’s Spring 2022 regulatory agenda was published June 21. In regard to OSHA, frankly, it’s disappointing.

Certainly, the agency’s standards on process safety management and lockout/tagout – both of which are on the agenda – need updating. Unfortunately, rulemaking on these and other key standards likely won’t be acted on. Although the agenda lists 26 OSHA standards, only a handful are actually under development.

Normally during the pre-rule stage, OSHA announces a rulemaking and then asks a series of questions through either an advance notice of proposed rulemaking or a request for information posted in the Federal Register.

The final rule stage includes sorting through all the comments received, writing the final rule, and posting or issuing a final rule. After publication of a final rule, OSHA will often prepare a Q&A document, a compliance directive and small business guidance, as well as conduct training on the new standard.

On the current agenda, five standards are listed in the pre-rule stage. The key ones, from OSHA’s perspective, seem to be workplace violence prevention in the health care industry and heat illness. Labor Secretary Marty Walsh recently announced that after rulemaking on a permanent standard on COVID-19 for the health care industry, workplace violence prevention in that industry would be the priority for OSHA.

Although a standard on process safety management is listed in the pre-rule stage, it’s doubtful it’ll be worked on.

Meanwhile, 15 standards are listed as being in the proposed rule stage. Many are small updates or corrections to existing OSHA standards, such as those on personal protective equipment in construction, walking-working surfaces, cranes, shipyard fall protection and powered industrial trucks.

Two key OSHA standards listed in the proposed rule stage involve infectious diseases and lockout/tagout. A proposed standard on infectious diseases was developed by the agency during the Obama administration, but OSHA never moved forward on it. The current standard on lockout/standout (1910.147) is 33 years old and doesn’t allow the use of new technology for the isolation of hazardous energy. The standard on lockout/tagout needs to be updated, but likely won’t be worked on during this rulemaking round.

An interesting standard also listed in the proposed rule stage is one on tree care. OSHA applies a variety of existing standards to enforce worker protections in this industry. Work on the rulemaking began after the Tree Care Industry Association formally petitioned the agency in 2006. OSHA issued an ANPR two years later and, in 2020, the standard underwent a required review by a SBREFA panel. This is one standard that just might see some movement under this regulatory agenda.

OSHA lists six standards in the final rule stage. Four are on whistleblower statutes that OSHA was given responsibility over. The other two: an update to the standard on hazard communication (1910.1200), which is designed to align the standard with that of other countries as part of the global harmonization process, and the permanent standard on COVID-19 for the health care industry. Both of these should be issued as final rules by the end of the calendar year.