We use cookies to provide you with a better experience. By continuing to browse the site you are agreeing to our use of cookies in accordance with our Privacy Policy.
Home » Educated and empowered
JUNE FEATURE During a training session in California last year, an instructor asked participants if anyone had heard of the California Division of Occupational Safety and Health. Two farm workers raised their hands and said they knew about the agency, and that if their crew leader failed to provide water and shade (as mandated by Cal/OSHA’s heat illness prevention standard), they would report him to Cal/OSHA.

The comment was striking to Suzanne Teran, program coordinator of the Labor Occupational Health Program at the University of California, Berkeley, because it demonstrated that the two workers felt comfortable bringing up safety concerns at work. In her years of providing training to under-served populations, Teran said, she has found many workers are not familiar with Cal/OSHA and workplace rights.

Teran’s observations fit with research showing foreign-born workers often lack adequate safety training and knowledge of the workers’ compensation system, which then puts their safety at risk. Employers can play a key role in filling the knowledge gap by providing appropriate training and creating a safety culture that encourages injury reporting.

Foreign-born workers made up 15.9 percent of the U.S. workforce in 2011, according to the Bureau of Labor Statistics. They face a higher risk of injuries and illnesses partly caused by disproportionately working in dangerous industries such as construction and agriculture, and cultural and economic issues, NIOSH states.

Teran identified language barriers as one of the major obstacles facing immigrant workers. A lack of English proficiency can affect their ability to understand and convey safety issues at work.

OSHA requires employers to provide training in a language and vocabulary that workers can understand. In addition, Teran said, non-English speakers need – at a minimum – to learn English words for job hazards and emergency situations. Likewise, supervisors should be able to communicate basic messages in their workers’ native language. She also recommends providing worksite signs and safety messages in multiple languages.

Along with language, employers should consider the education level of the workforce. “I do think that one of the other issues that is important to address with immigrant workers is literacy, and that’s something that we have encountered a lot in multiple industries,” Teran said. “There are definitely many workers who would struggle with a lot of written materials.”

Even when training is provided, comprehension is not guaranteed. Teran recommends using practical examples and stories along with visuals to convey key messages. The trainer also should ask questions and allow workers to do the same – both of which help the trainer check for understanding and promote critical thinking, Teran said, adding that training should be ongoing rather than a one-time occurrence.

One model she has seen implemented with success is peer-to-peer training, in which experienced workers help train other workers in a small group. 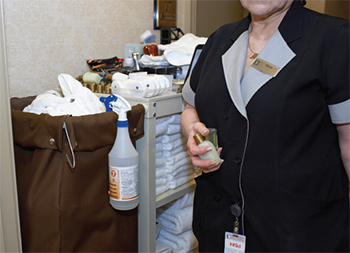 Although credible peers can provide a trusted source of information, Teran cautions employers about asking a bilingual employee to translate during a large training session. She said she has heard stories of training not being worthwhile for workers because of poor translation.

“You can be bilingual and not be very good at translation and interpretation,” Teran said. For employers who cannot afford to hire a professional translator, she advises screening bilingual workers carefully before assigning them the task, and being clear about expectations.

Teran emphasized the importance of providing comprehensive training – even if workers have performed similar work in their home country, they may have used different tools and processes. “It’s always important to presume that people are going to need basic training and introduction to the industry even if they have done that elsewhere,” she said.

Hector M. Escarcega is president and CEO of Bilingual Solutions International in Los Angeles, which provides training, coaching and translation services to help employers communicate with Spanish-speaking workers. Escarcega noted that workers may come from countries where safety is not a priority or regulation is lax, so they have been socialized to work hard but not safely.

Those workers have a strong work ethic, which managers love, but “they’re going to ask very [few] questions because they don’t want to make waves,” he said. “And unless we teach them proper safety practices, they’re going to work at a high production rate, but they’re also going to do it with their work habits, which many times can be taking shortcuts or not working safely, which ultimately will lead to accidents.”

Like Teran, Escarcega supports using pictures and props to help communicate safety messages. He used the example of bringing in a harness for workers to put on as part of fall protection training. Such hands-on training, he said, is why employers do not necessarily have to master another language to communicate effectively with non-English-speaking workers.

Living in the country illegally is one reason some immigrants feel uncomfortable speaking up about workplace hazards. In May, the Los Angeles-based National Council for Occupational Safety and Health called for immigration reform to provide a path to citizenship for these workers so they can fully exercise their workplace rights. National COSH said immigrant workers hesitate to report dangerous conditions because they do not want to lose their jobs. A series of reports from the Austin, TX-based Workers Defense Project made similar conclusions.

WDP helps low-income workers secure fair employment. In collaboration with the University of Texas at Austin, WDP surveyed 1,194 Texas construction workers, many of whom were Latino and born in another country. Sixty percent of respondents said they had not received OSHA-certified construction safety training. Many also described unsafe conditions such as not being given adequate rest and shade in high heat, according to the report, which was released in January.

Another report from the group, issued in February and using the same data, focused on “undocumented” workers, which made up half of the respondents. Of those, more than 70 percent said they had not received safety training. Additionally, 79 percent had not completed high school or attained their GED, and 70 percent spoke little or no English. When it came to reporting unsafe conditions, survey results showed that undocumented workers were twice as likely as their U.S.-born peers to face threats from their employer for speaking up, which helps explain why many remain silent.

A recent survey of immigrants in New Hampshire further highlights the precarious position of immigrant workers. In a survey of 366 immigrants, 62 percent said they did not know their medical bills for a job-related injury would be paid by workers’ comp. The report was a joint project from the state’s Department of Health and Human Services and the New Hampshire Coalition for Occupational Safety and Health. The workers were primarily from Asia, Dominican Republic/Haiti/Cuba, Africa, and South and Central America.

“We found that a lot of immigrants will accept dangerous work because they need the work and they may be used to that kind of work environment in their own native country,” said the report’s author, Karla R. Armenti, principal investigator in the Occupational Health Surveillance Program of the state’s Division of Public Health Services.

In conversations with workers, Armenti learned many had multiple jobs despite being in physical pain from the labor. Some were highly educated in their home country, but the only job they could find in the United States was in cleaning or home health care. She said they recognized unsafe work, but feared losing their jobs or being deported. However, the workers often did not know much about OSHA. “That translates into a lack of understanding about the employer’s responsibilities in this country with regard to keeping them safe at work,” Armenti added.

Overall, workers who were surveyed described having a positive relationship with their supervisor. For example, 71.8 percent said their supervisor addressed safety problems, and 23 of the 29 workers who suffered injuries while working in the United States informed their supervisor. The ones who did not inform their supervisors gave reasons such as believing the injury was not serious and fear of being fired. Armenti said the findings indicate supervisors can help improve safety among this population by alleviating any fears workers may have about retaliation for speaking up. She also recommends bringing in local Coalition for Occupational Safety and Health groups or other advocacy groups to help with worker-to-worker peer training.

Additionally, employers need to try and understand the cultural norms their workforce is bringing to the job from their countries of origin. “For a lot of immigrants, it may be OK to work hurt in their country of origin. Employers have to try to understand where they’re coming from as a cultural perspective,” Armenti said.

Teran agreed. While cautioning against making broad generalizations, she said many of the workers she has encountered are hard-working and take pride in being able to perform hard physical labor that others are not able or willing to do. And in construction, research suggests workers accept danger as part of the job. All of this could play into what immigrant workers perceive to be hazards, Teran said.

Another issue is attitudes toward authority. Some cultures equate disagreeing with challenging authority, so Teran said employers need to clarify that speaking up is actually encouraged and safety is integral to the job. The goal is to establish a strong safety culture, which Teran said can be achieved by providing proper training, praising workers for safe actions and conducting regular safety meetings.

Fostering a culture in which raising safety issues and reporting injuries is encouraged rather than penalized “is what’s ultimately going to help address some of the fears and not wanting to step forward and mention that there are concerns,” Teran said.