We use cookies to provide you with a better experience. By continuing to browse the site you are agreeing to our use of cookies in accordance with our Privacy Policy.
Home » Most food industry employees work when ill, survey finds
Worker health and wellness Accommodations/food service Infographics 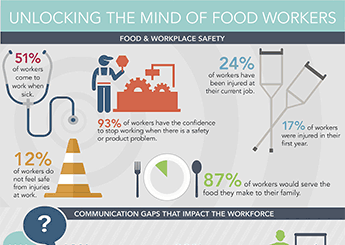 Austin, TX – A majority of food industry employees go to work when sick, according to a new survey commissioned by training and consulting company Alchemy Systems.

In the survey of more than 1,200 workers across the food supply chain, 51 percent reported that they always or frequently go to work when ill, a stark contrast to managers’ belief that only 18 percent of workers show up when sick. Many workers said they could not afford to lose pay by staying home (45 percent) or they did not want to let their co-workers down (46 percent).

Infographic: Mind of the Food Worker