We use cookies to provide you with a better experience. By continuing to browse the site you are agreeing to our use of cookies in accordance with our Privacy Policy.
Home » OSHA’s 'Top 10' most-cited violations
Federal agencies Statistics Fines/penalties OSHA Infographics 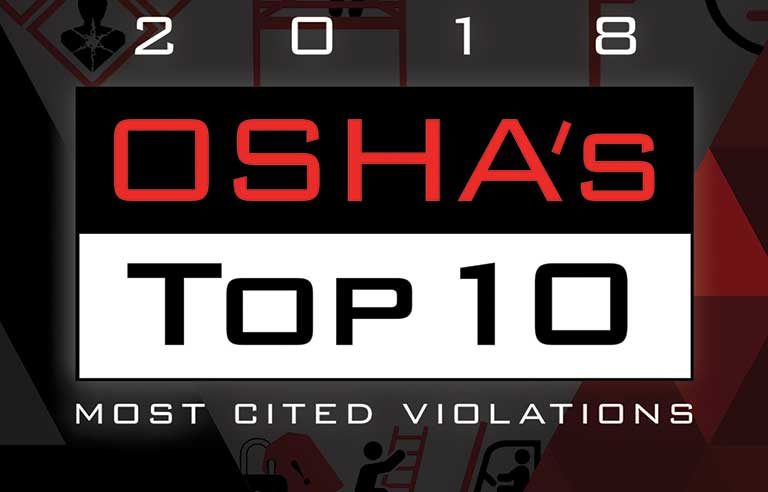 Q & A with OSHA's Patrick Kapust

Preliminary data for OSHA’s Top 10 most cited violations for fiscal year 2018 was announced Oct. 23 at the National Safety Council Congress & Expo in Houston. Later that day, Patrick Kapust, deputy director of OSHA’s Directorate of Enforcement Programs, sat down with Safety+Health Associate Editor Kevin Druley to talk about the list, including how several recent initiatives have helped the agency track and target the most frequently cited violations.

Safety+Health: What is the most important message you’d like to send to employers regarding the Top 10?

Patrick Kapust: The Top 10 represents the most frequently cited standards, and they are a good place for the employer to start [to] identify hazards in their own workplace. Another good tool that we have available on OSHA’s website is a page that allows users to research the frequently cited OSHA standards by industry.

So, while the Top 10 is a good place to start, if you’re really serious about finding the hazards in your workplace, you may want to take the extra step to find out what’s the most hazardous in your industry and what we are seeing in terms of violations in your particular industry. And, of course, OSHA does offer compliance assistance at no cost for employers that are interested in correcting hazards before an inspection. Another free service, designed especially for small businesses, is the consultation program. And our website has a number of helpful eTools and publications, as well. We encourage anyone who’s interested to take advantage of these resources.

S+H: How does OSHA assess the addition of the Eye and Face Protection Standard to the Top 10 list? To what extent did violations reflect worker negligence or substandard training programs?

Kapust: In many of the cases, eye protection was not provided or just was not used. It’s hard for me to get that granular from the Top 10, but this could be due to new tasks that employees have been assigned, or new tasks that the employer has taken on and didn’t do what we call a hazard assessment.

Whenever an employer takes on a new job or does a new task, they should do a hazard assessment of that workplace to see what hazards there are and how you can protect your employees from them. Maybe eye and face protection was needed in these, and because the employer hadn’t done that hazard evaluation, they weren’t able to recognize it.

S+H: What can employers do to help the OSHA inspection process go smoothly?

Kapust: The most important thing for an employer to remember is to participate in the inspection and ask questions about the things you don’t understand.

When the compliance safety and health officer (CSHO) arrives, he or she will conduct an opening conference and explain why OSHA is doing the inspection and its scope. Then, the next phase of the inspection is called the walkaround. During the walkaround, compliance officers may point out some apparent violations that can be corrected immediately. While the law requires that these hazards be cited, prompt correction is a sign of good faith on the part of the employer.

Compliance officers try to minimize work interruptions during the inspection and will keep confidential any trade secrets they observe. Employers are encouraged to participate in the walkaround, but the interviews that we do with your employees are done privately.

At the end of the inspection, the CSHO will conduct what we call a closing conference, where he or she reviews all the apparent violations and talks about what your rights and responsibilities are after the inspection. But we encourage employers to ask questions so that they understand what the next steps are and what the hazards are that need to be corrected and how they can be corrected.

S+H: OSHA listed one proposed penalty in excess of $1 million in FY 2018, compared with three in each of the past two fiscal years. How should employers view this? What does it represent to OSHA? Was the agency less forceful as pertains to penalties in FY 2018?

Kapust: Every inspection and the circumstances of an incident are unique. The majority of egregious cases – that would be those with the largest penalties – are the result of an unprogrammed event, such as a fatality or a complaint. OSHA does not have control over how or when these incidents will occur. It’s also important to keep in mind that OSHA does not set goals for the amount of penalties – either overall or by individual inspection. OSHA has a stringent review process in place to ensure the agency is enforcing the standards and regulations and applying penalties fairly and consistently.

The average penalty per violation increased significantly in 2016 due to the Federal Civil Penalties Act Improvement Acts of 2015. As a result, OSHA was directed – based on the consumer price index difference between 1990 and 2015 – to raise our penalties by approximately 78 percent.

S+H: On Sept. 28, the deadline to comment passed on a proposed rule that would roll back two major parts of the Improve Tracking of Workplace Injuries and Illnesses final rule. What are the latest developments here? What can employers expect going forward?

Kapust: OSHA received 170 comments in response to its notice of proposed rulemaking; 163 can be found in the rulemaking docket at regulations.gov, “OSHA-2013-0023.”

The remaining seven submissions were not related to the docket subject matter, or they were duplicates. OSHA is currently evaluating the comments submitted to the rulemaking docket and drafting a final rule. OSHA expects to publish a final rule by or before June 2019.

S+H: OSHA transitioned to its more web-based OSHA Information System more than five years ago. How has the change improved data tracking and evaluation? In which other areas has OSHA seen benefits from the use of emerging technologies?

Kapust: The OSHA Information System (OIS) has increased OSHA’s ability to analyze program activity to better identify trends and emerging issues. For example, when OSHA implemented the new severe injury reporting requirements in 2015, a new module was added to OIS that allowed us to track injury reports and whether they were handled as either rapid response investigations or inspections.

Integrating the new injury data directly with the enforcement data allowed OSHA to closely monitor the new program as it was being implemented – a process that would have been much more challenging prior to OIS.

OSHA continues to look for ways to apply new technology, as resources allow. OSHA field staff have piloted the use of drones during the inspection process to reduce risk to CSHOs. Compliance officers in the Seattle region have used drones to photograph a barge while remaining on shore, and they were able to see the underside of an overpass during sand blasting activities. So that’s just another area, and we put out a memo to our field on drone use this past summer.

S+H: How are things going in the enforcement directorate?

Kapust: OSHA has continued to address the hazards that are causing the more serious injuries and illnesses for workers. We recently launched a site-specific targeting program that will allow our CSHOs to find and inspect establishments with injury and illness Days Away, Restricted Activity, and Transferred (DART) rates that are well above their industry average. And we continue to respond to fatalities, complaints and catastrophes as well. We’re in the fourth year of the severe injury reporting program, which has resulted in an average of 1,000 reports per month. OSHA has and will continue to look for the most effective and efficient means of addressing workplace safety and health.