We use cookies to provide you with a better experience. By continuing to browse the site you are agreeing to our use of cookies in accordance with our Privacy Policy.
Home » A look at control banding
Hazard communication Workplace exposures

A look at control banding

Typically used to protect workers from chemicals, the process has potential use in other areas David Zalk first became acquainted with control banding in the late 1990s as an industrial hygienist. When his work shifted to environmental, health and safety management in 2007, he started thinking that it could have uses beyond its usual realm of bulk chemicals.

At its heart, control banding – a qualitative system of risk assessment – is about using what is known to try to manage the unknown. It’s often used for potential hazards surrounding chemicals – almost 99% of which do not have occupational exposure limits, according to NIOSH – because of the regular production of new chemicals.

“I thought there must be a way to take that mindset and see how else it can apply,” said Zalk, deputy EHS team leader at the Lawrence Livermore National Laboratory and member of the American Industrial Hygiene Association’s Exposure and Control Banding Committee.

Since then, Zalk has proposed ways to use control banding in areas such as construction and nanomaterials.

Banding refers to a range or “band” of hazards (e.g., skin/eye irritants, carcinogens) surrounding a particular chemical substance. This determines the appropriate control method(s), including ventilation, dilution or containment.

“The conceptual basis for CB is the grouping of chemical exposures according to similar physical and chemical characteristics, intended process/handling, and anticipated exposure scenarios (amount of chemical used and how workers will be exposed),” NIOSH states in its 2009 report “Qualitative Risk Characterization and Management of Occupational Hazards: Control Banding.”

Thomas “T.J.” Lentz, science applications branch chief in NIOSH’s Division of Science Integration, said control banding is an approach based on two pillars: the limited number of control methods available to protect workers and “that many problems have been met and solved before.”

Associate Editor Alan Ferguson discusses this article in the May 2020 episode of Safety+Health's “On the Safe Side” podcast.

“CB uses the solutions that experts have developed previously to control occupational chemical exposures and [applies] them to other tasks with similar exposure situations,” Lentz said.

The Canadian Center for Occupational Health and Safety states that determining the hazard band of a product relies on factors such as:

“Once the hazard band is determined, a control measure strategy is suggested,” CCOHS states. “A product with greater health hazards and higher exposure potential will have more stringent controls than a product with low health hazards that is unlikely to come in contact with or enter a worker’s body.”

The concept of control banding originated in the pharmaceutical industry, which used performance-based exposure control limits as a means to protect employees from active ingredients used in products, a 1996 paper published in the AIHA Journal states.

In the late 1980s, the Health and Safety Executive, which regulates and enforces British workplace safety and health, developed the Control of Substances Hazardous to Health – commonly referred to as COSHH – to assess risks in the workplace.

To help small and medium-sized organizations better understand and comply with the regulations, HSE created the COSHH Essentials, a series of fact sheets for processes or tasks in particular industries.

The agency also developed an e-tool to provide industries not included in the fact sheets answers to basic questions and “the most appropriate generic control guidance sheet.”

On its website, NIOSH acknowledges that it considers control banding “a potentially useful tool for small businesses” because it helps focus limited resources on managing exposures.

Not a replacement for expertise

“It is important to note that control banding is not a replacement for experts in occupational safety and health,” he said. “CB highly recommends the use of professionals to provide recommendations. Furthermore, CB recommends exposure monitoring to follow the CB intervention to ensure the installed controls are working properly.”

“The two processes can work together, but they are distinct,” Capt. Lauralynn Taylor McKernan, of the U.S. Public Health Service, says in a video on NIOSH’s website.

Zalk, meanwhile, has focused on trying to make control banding work across multiple disciplines and for qualitative risk management. Some of that, he said, stemmed from a different setup at Lawrence Livermore National Laboratory.

Safety topics such as confined spaces and welding fall primarily under industrial hygiene in the organization. LLNL’s focus on research and development, including explosives, can create new challenges and unique hazards.

The laboratory also has to navigate federal OSHA and Department of Energy regulations. “For industrial hygiene, the (Department of Energy) contract requires the lowest established occupational exposure limit for a given chemical, physical or biological exposure,” Zalk and others write in a 2010 paper published in the journal Industrial Health.

LLNL uses a risk-level based management grid with potential severity of injury and the probability of injury as the two axes. From there, the risk management control outcomes from the grid are filled in with risk levels ranked from 1 to 4, geared toward ensuring regulatory compliance. 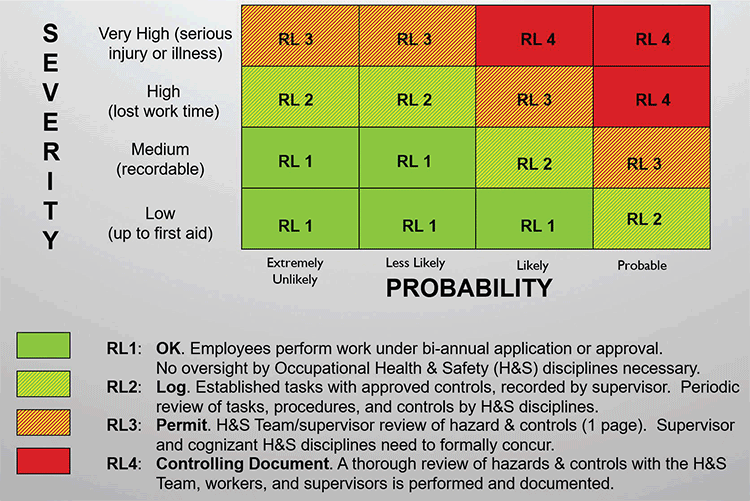 RISK LEVEL 1: Employees perform work under biannual application or approval, and no oversight is needed.

RL 2: Established tasks with approved controls are logged by a supervisor. Periodic review of the tasks, procedures and controls is necessary.

RL 4: Controlling Document. A thorough review of hazards and controls with the H&S team, workers and supervisors is performed and documented.

In papers for different journals (many of which are available at controlbanding.llnl.gov), Zalk and others made similar models to determine potential controls for nanomaterial and construction industry hazards. Those tables used point totals to determine the risk level, or the combination of severity and likelihood in encountering danger.

In one example in the construction paper, the risk levels – also 1 to 4 – corresponded to the type of jobsite training needed. RL4 required a safety expert on site, and RL3 required a “competent person.”

The paper also included a managerial “structure” for control levels – also 1 to 4 – for standard tasks. Like the training matrix, control level 4 requires an “expert-based approach” from a safety professional or industrial hygienist while CL 3 suggests needed input from a “competent person.” Generally speaking, Zalk describes level 1 as a “green light,” levels 2 and 3 as “yellow lights,” and level 4 as a “red light.” The system allows LLNL’s EHS team to focus its efforts on riskier actions.

“It’s helping us to determine where are the team’s time and resources best used,” Zalk said. Among the other benefits, he said, are more consistency among industrial hygienists and better standardization of controls for common tasks. It also gets workers in the habit of contacting the safety team if they’re unsure about something.

“The dotted line between Risk Level 2 and 3, that’s all I want them to do, is pick up the phone,” Zalk said. “When we have them picking up the phone and asking us questions in the middle of a task, something changed. Risk communication has been a byproduct out of all of this.” Worker involvement and input also play a role in developing the risk-level control outcomes and identifying hazards.

“If we all speak the same language, the workers will understand us better,” Zalk said. “If we can train them about what we know and they can train us about what they know, we’re going to end up having a good working relationship and a safe, healthy workplace.”

Demolition work: A look at the hazards