We use cookies to provide you with a better experience. By continuing to browse the site you are agreeing to our use of cookies in accordance with our Privacy Policy.
Home » Short staffing ‘continues to be the biggest risk’ to Chemical Safety Board: EPA OIG report
Federal agencies Manufacturing Leadership 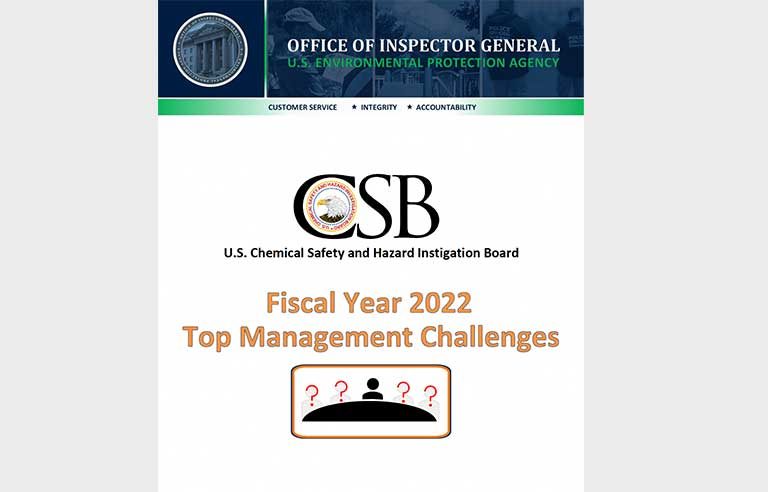 Washington — Carrying on with only one of its five board seats filled “impairs the function” of the Chemical Safety Board and “continues to be the biggest risk” to agency operations, the Environmental Protection Agency Office of Inspector General contends in a new report.

CSB Chair and CEO Katherine Lemos has operated as the sole member of the board since May 2020.

According to the report, issued Nov. 10, “workload limitations arising from one board member attempting to perform the work of five impair the board’s ability to fulfill its responsibilities without risk of internal control concerns.” In addition, the lack of a full board “may prevent the CSB from achieving its stated mission to ‘drive chemical safety change through independent investigation to protect people and the environment.’”

In September, the Senate Environment and Public Works Committee approved the nominations of Sylvia Johnson, Steve Owens and Jennifer Sass as members of CSB. The trio is awaiting confirmation from the full Senate.

EPA OIG states that although the Senate is making progress toward potential confirmations, “the underlying circumstance has not changed since our last report,” issued in July 2020.

During a Sept. 29 hearing before the House Oversight and Investigations Subcommittee, Lemos testified that CSB is “on an upward trend” despite its long-standing and well-documented operational and staffing challenges.

Lemos’ opening remarks included updates that CSB, in fiscal year 2021, closed two of its 20 ongoing investigations and issued 19 new safety recommendations, compared with zero the previous fiscal year. She also said CSB is finalizing the hiring of four investigators and expanding its contractor base in specialized fields such as equipment testing and blast modeling, keeping CSB on track to reach an agency high for investigation and technical specialists by the end of FY 2023.

EPA OIG says it no longer classifies a lack of guidance on board member responsibilities, along with “maintaining safe and effective operations” during the COVID-19 pandemic, as top management challenges facing CSB.