We use cookies to provide you with a better experience. By continuing to browse the site you are agreeing to our use of cookies in accordance with our Privacy Policy.
Home » Coalition opposing increased poultry-production line speeds meets with USDA
Injury prevention Musculoskeletal disorders Food Manufacturing 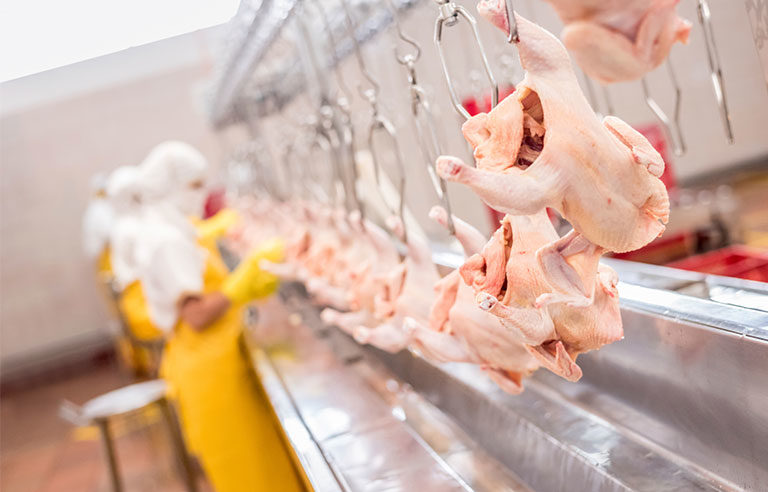 Washington – Poultry workers and officials from 13 nonprofit organizations and unions met with the U.S. Department of Agriculture’s Food Safety and Inspection Service on Oct. 16 to urge the department to reject an industry petition to allow faster and unrestricted line speeds in production plants, according to the National Employment Law Project.

In making the current standard – Modernization of the Poultry Slaughter Inspection – USDA determined in 2014, after two years of public comment, that it would not increase production speeds. The original standard had included a speed increase, and it was this particular aspect of the standard that received the most public comment, USDA states. It said in its final ruling that more study supporting the quicker lines was needed before an increase to 175 birds per minute from 140 could be implemented and, according to NELP, there has been none.

The coalition recommends that USDA disregard the request for three reasons: worker safety, animal suffering and consumer protection. The poultry industry has an injury rate two times the national average for all industries and an illness rate six times the national average. It reported 180 severe injuries from January 2015 to September 2016 – the 12th most by industry, and higher than construction, landscaping and sawmills, according to data from OSHA.

Those numbers are from only 29 states (21 states and Puerto Rico report to state OSHA authority). Both the Government Accountability Office and OSHA have said that workplace injuries are underreported, and they – along with NIOSH – have pointed specifically to the poultry industry as an example.

Animal rights organizations are against increased line speeds because they claim it would raise the likelihood of chickens being slaughtered inhumanely.

“Faster slaughter speeds means more suffering,” Deborah Dubow Press, director of regulatory affairs at the American Society for the Prevention and Cruelty of Animals, said in a press release. “Hundreds of thousands of birds are unintentionally boiled alive each year because fast-moving slaughter lines fail to kill the birds before they are dropped into scalding water.”

Finally, the coalition says that when production goes faster, the chance of salmonella or campylobacter in carcasses rises, endangering consumers.

“The evidence is clear: Any increase to line speeds would have serious negative consequences to the health of consumers and the workers who put food on America’s tables,” Deborah Berkowitz, senior fellow on worker safety and health with NELP, said in a press release. “USDA must reject this petition. They must not bend and break the rules to benefit big business and wealthy corporations at the expense of regular working people and consumers.”

The push for increased speeds comes amid the Trump administration’s push for deregulation. In its petition for increased line speeds, the National Chicken Council says the current limit is “arbitrary,” and stifles the industry’s goal for efficiency and the productivity to match foreign competition.

At the time of USDA’s rejection of increased line speeds in 2014, NCC President Dan Brown said, “It is extremely unfortunate and disappointing that politics have trumped sound science, 15 years of food and worker safety data, and a successful pilot program with plants operating at 175 birds per minute. The rule also goes against global precedent, in which the limiting factors for line speeds are the ability to meet food safety standards, keeping workers safe, and the capability of the equipment to run effectively – not government regulations. Broiler plants in Brazil, Argentina, Canada, Belgium and Germany, among others, all operate at line speeds of 200 or more birds per minute.”