We use cookies to provide you with a better experience. By continuing to browse the site you are agreeing to our use of cookies in accordance with our Privacy Policy.
Home » Lawmakers call for OSHA emphasis program after CDC report on silicosis among stone fabrication workers
Federal agencies Silica Workplace exposures Respiratory conditions Manufacturing 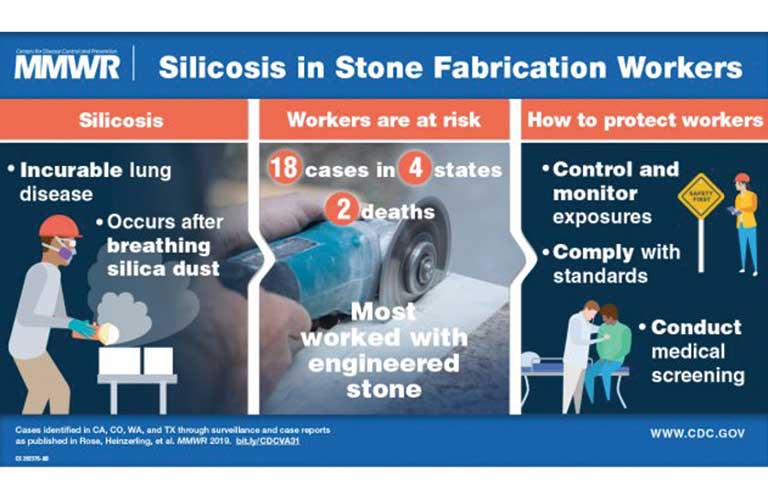 Washington — The Centers for Disease Control and Prevention is warning of “an emerging public health threat” after researchers identified an increase in cases of silicosis – an incurable lung disease – among workers who handle engineered stone used to make household countertops.

Silicosis is caused by inhaling particles of crystalline silica. Researchers identified 18 silicosis cases between 2017 and 2019 involving stone fabrication workers in four states using a California hospital’s discharge data, a Colorado physician’s review of electronic medical records, a report of an apparent cluster of cases among workers at an engineered stone countertop manufacturing and fabrication facility in Texas, and routine surveillance of workers’ compensation data in Washington state.

Previously, only one silicosis case had been reported in the United States, the report notes. Most of the 18 workers regularly worked with engineered stone – a manufactured, quartz-based composite product that can contain more than 90% crystalline silica. Among them, two died – the first reported U.S. fatalities linked to silicosis – several had a severe progressive form of the disease, and some had associated autoimmune diseases and latent tuberculosis infection.

In response to the report, Reps. Bobby Scott (D-VA), chair of the House Education and Labor Committee, and Alma Adams (D-NC), chair of the House Workforce Protections Subcommittee, on Oct. 7 sent a letter to Secretary of Labor Eugene Scalia, urging OSHA to enhance monitoring and protections for engineered stone fabrication workers at high risk of silicosis and other silica-related diseases.

“We are calling on OSHA to issue, without delay, a new [National Emphasis Program] that focuses on engineered stone fabrication establishments,” Scott and Adams wrote. “Absent timely action, OSHA will be failing these stone finishing workers and failing in its mission.”

The study was published online Sept. 27 in CDC’s Morbidity and Mortality Weekly Report.