We use cookies to provide you with a better experience. By continuing to browse the site you are agreeing to our use of cookies in accordance with our Privacy Policy.
Home » Is stress making your workers’ minds wander?
Research/studies Worker health and wellness Worker Health and Wellness 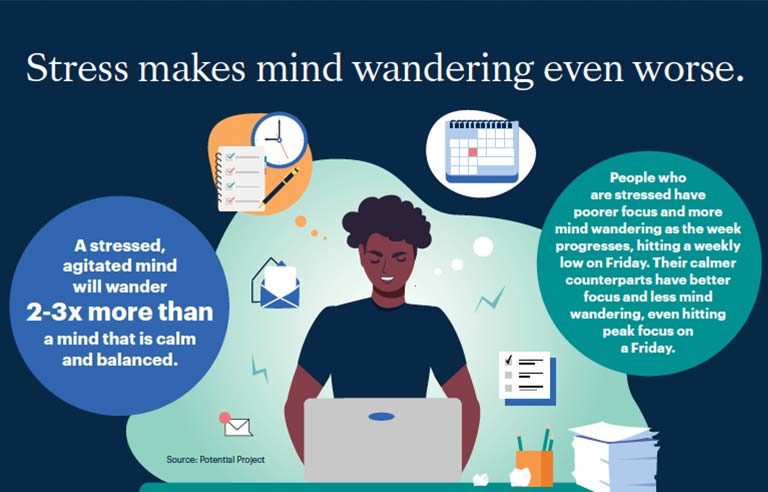 New York — Employees who feel stressed say their minds can wander for up to nearly 60% of the workday by the time Friday rolls around, according to the results of a recent study conducted by a global research, leadership development and consulting firm.

Researchers collaborating with the Potential Project gathered 225,000 data observations on employee focus, resilience and engagement for workers in 44 countries and 15 different industries. Overall, participants reported that their minds wander 37% of the time while on the job. The researchers also found that stress makes workers’ mind wander even more, causing two to three times more inattentiveness.

The researchers identified three key ways workers can limit how much their minds wander:
Daily mind-training practice. Workers who train their mind can direct it to feel more grounded, resilient and present. Results show that those who practiced mindfulness had minds that wandered only 28% of the time, as opposed to 52% for workers who didn’t.
Connecting with others socially. Doing so helped workers limit their wandering minds to 30% of the time, creating more balance and focus. Among workers who chose to be alone, their minds wandered 48% of the time.
A good night’s rest. Seven or more hours of sleep a night can benefit mental and physical health. Quality sleep helped to reduce mind wandering to 35% of the workday, compared with 41% for workers who slept less than six hours.